The Innocents (and Beathoven) - No Hit Wonders From Down-Under 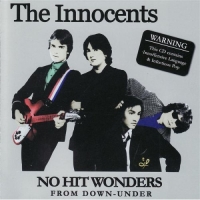 Sublime pop from downunda (Tasmania specifically). I recall seeing them on Countdown performing 'Sooner or Later'. Perfect pop. Kim Fowley also saw them and promised a deal. Off they flew to the US but - there was no deal. Kimberley was up to his usual trips so they limped back to Aus and struggled to make any headway. So, that was that. They called it quits. What you hear here is a 2CD compilation from that time. It includes their pre-Innocents days as Beathoven.
Fortunately, they kicked on again in 2006 - releasing 'Pop Factory'. Sunk without a trace .... unbelievable! After that 'Teardrop Kiss' (201)8. It was my pick of best album from that year. No one came close. You really must listen to these guys. Downloads are on this blogsite.